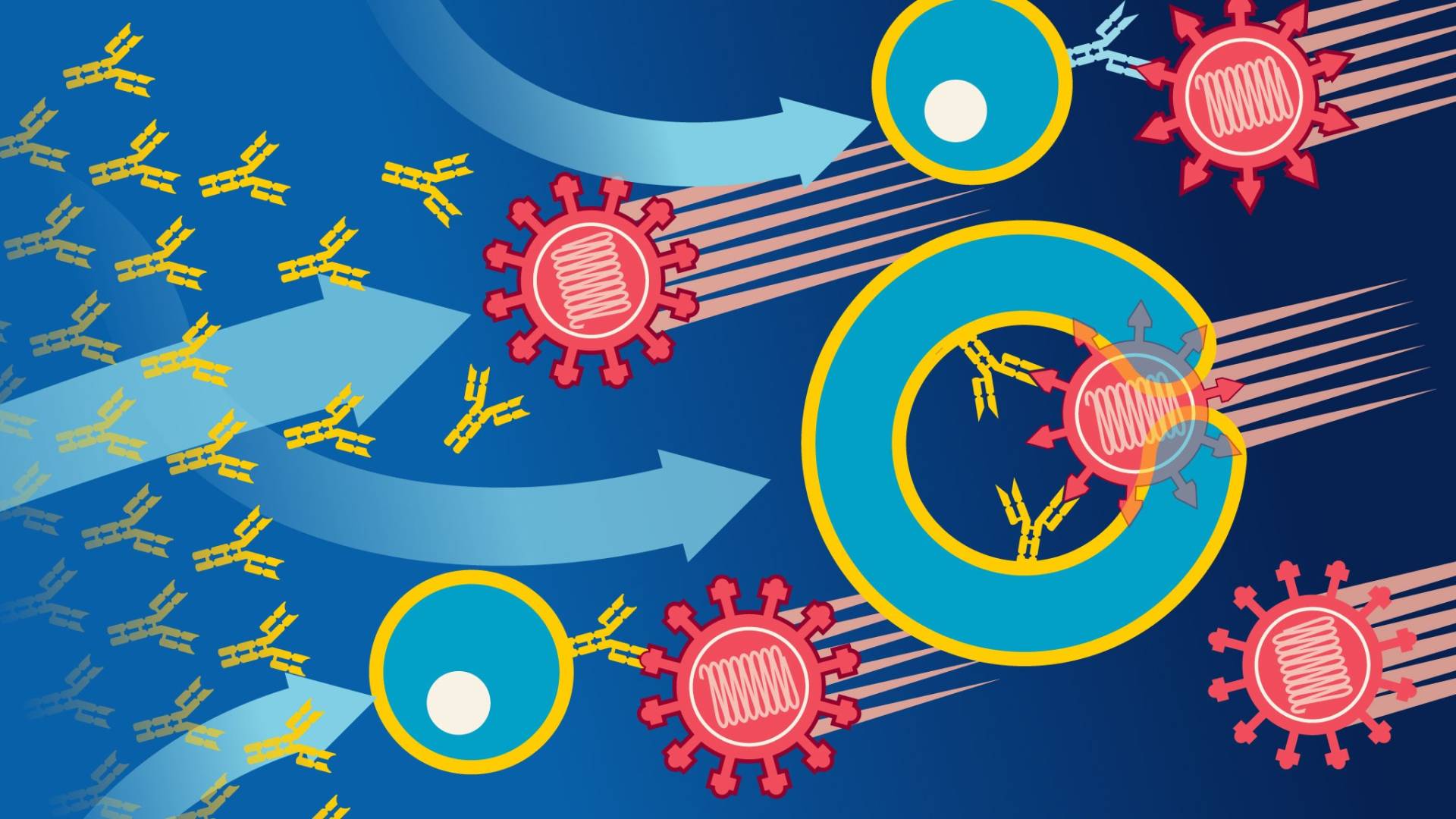 Antibodies to FIPV antigens are involved in two different immune processes, neither of which correlates with immunity. The first is an Arthus-type hypersensitivity reaction targeting small venules, while the second is an antibody-mediated increase in viral uptake and replication by macrophages. All three components of the Arthus-type reaction, antigen, complement and antibody, are present at high levels in lesions, especially in cats with effusion FIP. Arthus reactions are characterized by vasculitis, swelling, inflammatory cell migration and necrosis. Antibody-mediated disease exacerbation was first described by Pedersen and Boyle. They found that the presence of antibodies and the symptoms of the disease were always closely linked. Seronegative (naive) cats developed the earliest symptoms of FIP within 10-16 days or more after the experimental infection, and the timing of the disease always coincided with the presence of antibodies. Healthy FCoV antibody-positive cats (ie, were exposed to FECV) were then exposed to FIPV. It was later confirmed that the phenomenon of antibody-mediated disease progression included antibodies against specific epitopes on the spike protein; these antibodies also functioned as neutralizing antibodies in vitro. In vitro macrophage infection was significantly increased by the addition of immune serum. This has led to an acceptable theory in which viral particles coated with antibody and complement have been absorbed via fc receptors on macrophages by endocytosis.[3]. Thus, FIPV enters the host cell at which point the virus spreads to other sites in the body through macrophage migration. Antibody-mediated enhancement of macrophage infarction appears to be serotype-specific, ie an antibody to FIPV serotype II only increases macrophage infection of FIPV serotype II[4].

Antibody-mediated immunopathogenesis in effusion FIP and the role of macrophages in the disease appear to be similar to those described in Dengue hemorrhagic shock syndrome (Halstead, 1979). Arthus-type reaction is a hallmark of Dengue shock disease syndrome and effusion FIP. Virus-loaded macrophages, viral particles, and viral proteins accumulate around small veins. These localized sources of antigens, as well as antigens in the blood, can complement each other and form immunocomplexes. As a result, immune complexes accumulate around small venules and trigger the release of specific macrophage factors that cause tissue damage. Paltrinieri et al. (1998) also demonstrated that FIP lesions contained many virus-infected macrophages, and that extracellular viral antigens were detectable in foci along with necrosis. Necrosis is one of the hallmarks of Arthus-type vasculitis[5].

Although much work has been done in the field of antibody-mediated FIP potentiation, naturally occurring FIP may be of a different nature than in the laboratory. This phenomenon has been described mainly between certain FCoV isolates and unknown FECV strains. In general, the more virulent the FIPV isolate, it is shown that the more likely it is to respond to antibody amplification (Pedersen, 2009). If humoral immunity does not protect cats from virulent FIPV strains, then what is the nature of immunity to FIPV? Immunity to FIPV is thought to be largely cell mediated. Reasons for this assumption include:

The existence of a second type carrier in infections such as tuberculosis, blastomycosis, histoplasmosis and coccidioidomycosis is known to exist, and immunity is maintained in these situations by the persistence of a small number of organisms in the mesenteric or bronchial lymph nodes. This type of immunity, called "premonic" (intuitive) or infectious immunity, persists only as long as intracellular pathogens persist in a reactivatable form (Pedersen, 1987). The same phenomenon was probably observed in cats immunized with live FIPV with modified virulence. Immunized cats showed no external signs of disease even after four months when exposed to virulent FIPV, but residual FIP lesions were confirmed histologically.[7].

DeGroot-Mijnes et al. (2005) presented a unified concept of T-cell responses in FIP. They postulated that virus-induced T cell depletion and T cell antiviral response are conflicting forces and that the effectiveness of early T cell responses critically determines the outcome of the infection. If the virus wins, FIP will occur, while if the host wins, no disease will develop. They observed a consistent increase in viral RNA levels in the blood of end-stage FIP cats, suggesting that the fatal disease is directly related to loss of immune control and uncontrolled circular replication. Paltrinieri et al. (1998) analyzed lymphocyte subsets of CD5, CD4, CD8, CD21 markers by flow cytometry [8]. Cats recently infected with FECV that did not develop FIP showed a moderate increase in T cells. FECV-infected cats with a high prevalence of FIP showed a slight and persistent decrease in T cell subsets, while cats with FIP had a significant decrease in all lymphocyte subsets. Of course, using the approach of whether a chicken or an egg was used before, it can be argued that the level of viremia determines the outcome. [9].

Both genetic and host factors appear to have a strong influence on resistance or susceptibility to naturally occurring FIPV. FIP studies at many purebred Persian kennels have shown that susceptibility is hereditary and accounts for about 50% in the incidence of the disease. [10]. Addie et al. (2004) attempted to associate disease susceptibility with certain alleles in the feline MHC DRB gene (feline leukocyte antigen or FLA). Individual cats have been shown to have between two and six FLA-DRB alleles, but no specific allele appears to be related to either FIP development, FCoV resistance in general, or FECV carrier status. However, this was only a pilot study with a limited number of cats or a small study size to conclude that genetic differences in the FLA complex are not part of the FIP. Cats that developed FIP after natural FCoV exposure were reported to have a significantly higher rate of viral replication or reduced viral clearance capacity than cats that were exposed to the virus but did not develop FIP; indicating a host factor [11].