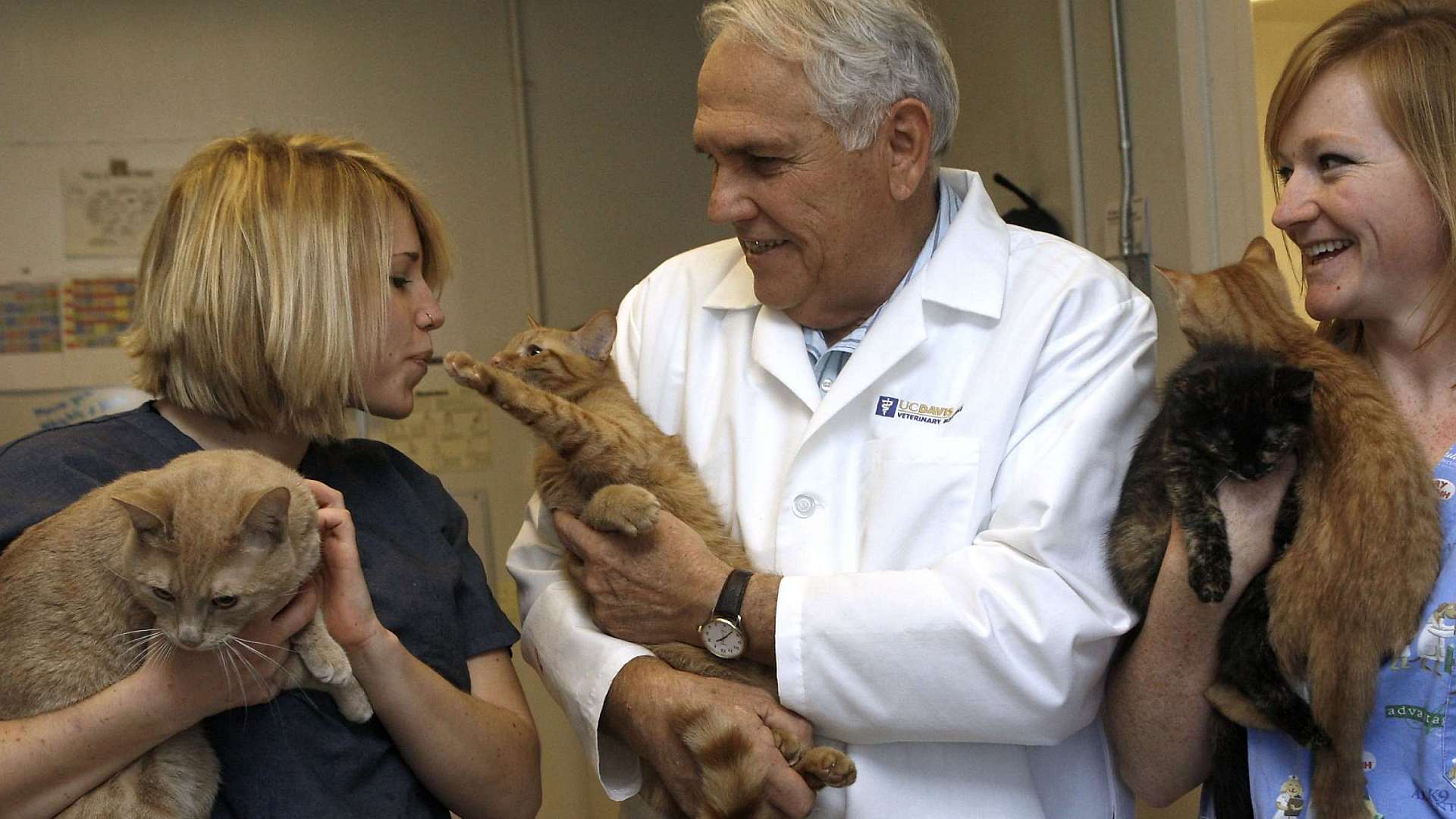 I was born in 1943. My father was a Danish emigrant and my mother was the daughter of Danish emigrants. However, I learned that I also have Swedish roots after my father's line. I spent the first 14 years of my life in Southern California (Azusa and San Dimas), where my parents rented and then owned several family poultry farms. Although wholesale and retail eggs were their main business, they also raised ducks, geese and turkeys for the holidays. My father liked cats, but not pets. He always kept a large number of them on the farm to keep the rodent population low and their diet was supplemented by blood eggs. I loved all sorts of animals and bred pigeons, pheasants, wild ducks. As a pet, I even had a goat and a rabbit. However, my greatest love was the cats.

My first feline companion was a white, short-haired female with brownish ears, called MoMo (the mother of a cat in my child's tongue). She lived with me for 14 years and regularly and later irregularly gave me kittens. I also befriended many wild cats and one of my tasks was to sit with a box of kittens when customers came to buy eggs. I found homes for many kittens and once in a while I got 25 or 50 cents. I got to know the character and personality of cats more than anyone else. My life changed in 1956, when a huge summer fire in the hills around our San Dimas farm caused the temperature around the chickens to rise to more than 53 ° C and we lost all the water used to cool them. Sixty thousand chickens died within a week as a result of the sunburn. This unfortunate incident was, in fact, a blessing, as small family poultry farms in Southern California were rapidly becoming unprofitable, and this event forced my father to leave poultry after 30 years. He monetized all the property, which had some value, and exchanged it for a small warm spring resort in southern Nevada, and since then my family has been a real middle class. The resort was located in a valley called Upper Muddy, which also housed a large cattle ranch. The high school was 20 miles from Overton and the school started by 6:30. I started high school as a freshman with great tremor and on the first day of school I immediately fell in love with my future wife (Gerie). A small high school and living in a Mormon farming community have given me all sorts of experiences I wouldn't have had if I attended a much larger high school in Southern California. Every capable boy competed in sports and there were many interesting courses and extracurricular activities. Each student had to participate in several activities. My greatest high school experience was with Future Farmers of America, and I eventually became an FFA civil servant.

In 1961, I was accepted to the University of Nevada in Rene for scholarships from the Union Pacific Railroad and the Max E. Fleishman Foundation with the intention of becoming a teacher of professional agriculture. I soon realized that this was probably not the best career choice, but I had no idea about anything else. At the end of the first year, however, I switched to Animal Sciences and in the second year I began to attend much more demanding subjects in preparation for a possible Ph.D. in this field. My life changed again when I enrolled in a veterinary course led by one of the two veterinarians who were responsible for the small veterinary program at UNR. I have never had any direct experience with veterinarians before. Dr. Marble started my interest in veterinary medicine and even allowed me to help him with some of his experimental operations. I was immediately caught up in it and at the last minute I applied to three veterinary schools, UC Davis, WSU and CSU. I was accepted to all three schools, but I decided to go to UC Davis, California, which was closer to my home. I'm a native Californian (and an adapted Nevada). I was also fortunate that my tuition was paid by the state of Nevada under the Western Interstate Compact for Higher Education (WICHE).

I entered veterinary school in September 1963 with the intention of becoming a general practitioner for cattle (my second and third loves are cows and poultry). I worked on several science projects over the weekends and holidays, and I fell even more in love with research. In August 1964, I married my high school love Gerie. In my spare time, I worked with one of the graduate pathology students on a new feline disease called feline peritonitis and co-authored my first scientific article on FIP in 1964. I was horrified by a lack of knowledge about cats and their diseases, but that didn't stop me. After graduating from veterinary school, I graduated in internal medicine for small animals and surgery at Colorado State University, which significantly affected my future life and career. Once again, I realized how little we knew about cat diseases, and I became even more aware of my lifelong affinity and understanding with this species. Prior to my internship in 1967, I was accepted as a graduate student at the John Curtin School of Medical Research (JCSMR), Australian National University, Canberra, ACT, Australia. Australia has fascinated me all my life and JCSMR has given me not only a great research experience, but also my first experience with this vast and beautiful country. After graduating, I worked briefly as a celebrity practitioner in Hollywood to earn money to get my family (I already had a daughter) to Australia. Studying research at the Department of Experimental Pathology at JCSMR was unmatched, but not entirely related to my future career. But I learned about experimental methods. In 1972 I received my Ph.D. from experimental pathology and immunology with honors in. My love for Australia, which I cultivated in books as a child, became a lifelong passion. My hobby is identifying and photographing Western Australian plants. At our house in Winters, California, I have a large collection of photos of the flowering shrubs of Western Australia.

Dr. As longtime director of the Center for Pet Health (CCAH), Pedersen led a team that raised money and designed his current home. The CCAH building was completed in 2006 at a cost of $ 16 million, all of which was obtained from private sources. It is considered one of the most beautiful and functional buildings in the complex and is home to five clinical services and four major research programs.

In early 1972, I returned to the United States for a research position at the School of Veterinary Medicine at UC Davis, where I studied animal cancer associated with retroviruses. This was my first experience with the feline leukemia virus, which we saw during my studies in many cats, but whose cause was unknown at the time. My first year in research did not go well for me and I was considering moving to a postdoctoral position in transplant immunology at the University of Washington. Before formalizing this position, however, the dean of the Veterinary School called me and asked me if I would consider accepting a position at an internal medicine clinic for small animals. Dean Pritchard was tired of hiring doctors with rich clinical experience but weak scientific skills. He decided to try to admit to the clinic people with great research experience and good clinical potential. I became the first of a large number of employees at UC Davis with a professional background of this kind. It turned out to be a very wise decision, as the clinical program at UC Davis soon became world famous not only for its high clinical level but also high level of research.

I have worked at UC Davis since 1972 and retired in October 2013 as Professor Emeritus. I spent the first 17 years in clinics, teaching and working in research. For the rest of my time at Davis, my career was much more about administration and research. After serving as chair of the department, I became the founder and director of the Center for Pet Health and a few years later the director of the Laboratory for Veterinary Genetics. This latter function has rekindled my interest in the role of genetics in disease. Research into infectious and immunological diseases in cats and dogs has accompanied me throughout my career. I am still working and continuing my first love, research. I have no plans to retire if my health allows it, because for me, retirement in research is much better than retirement.

Although I have studied many infectious diseases of cats, FIP remains my first love, if the term can be called a disease that is still so widespread and almost always fatal. I learned to look at the FIP as a "worthy adversary." It is undoubtedly one of the most complex and challenging infectious diseases in existence, and trying to find prevention and treatment is what drives me the most. I realize that the answers don't just come. It's not like researching human diseases that have no problems with funding, whether from individuals or organizations that have a personal interest in discovering treatments. I hope that I will continue to strive to keep the disease at the center of attention, and I can say that I am not alone. I have recently reviewed more than 100 clinical and scientific publications on FIP submitted by research groups around the world since 2008. No other cat disease has received so much attention.

I enclose a more detailed biography of my career with an emphasis on FIP research, which still engulfs me. My biggest career successes have been in the field of feline infectious diseases such as FeLV, FIV, FCV, FECV and FIPV. My textbook on diseases in a multi-cat environment, which has become a classic today, is perhaps my best creative work. However, my wife, three daughters, a son and 7 (soon 8) grandchildren, all successful so far, are my greatest legacy. But I hope that at least for a while, my "paw prints" will remain visible through the literature on cat diseases. And something like pets I've always had cats - always only two and always males.

Note: When Dr. Pedersen mentions a more detailed career CV, meaning mainly a number of published articles that you will find in scientific journals.

This is a 1991 photo when I received my first Jean Holzworth Cat Research Award. Dr. Holzworth was for me the best feline medicine expert he had ever lived. She graduated from DVM at Cornell University and spent her entire life at Angell Memorial Animal Hospital in Boston. She wrote the first modern textbook on cat diseases and I considered her a good friend and inspiration. She convinced me of something I've always believed in - you can't be a great veterinarian for cats without deep and confidential knowledge of this species, including everything from anatomy and physiology to behavior. -DR. P.

Wife of Dr. Pedersen Gerie with the newest members of the SOCK FIP family - recently adopted two brothers Piper (right) and Frodo (left). Frodo and Piper are among the many former experimental cats that the Pedersen have adopted over the past 40 years.